Well today was definitely what I would define as a good day.

I didn't get to see dad until around 8 o'clock tonight, however I was able to speak with him around 6. He called Bubbie while I was there just before dinner. Yup, he called her. She said it was hard to hear him because he was speaking quietly [because of his mouth sores hurting] but the fact that he called was awesome.


Jason had seen him during the afternoon today and said he was up and even on his computer replying to emails from a few people. [if you got a reply, you should feel honoured] He was also up to taking a picture of himself, but not before he adjusted the brightness and contrast and put a lovely border around it. 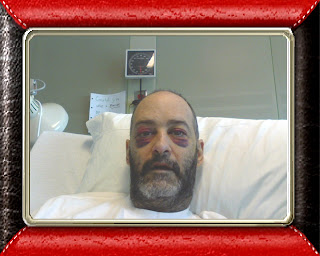 Just look at that mug

Seeing him today myself made me feel better than yesterday. He was more awake and talkative than he's been in a long time. He kept telling us about what the doctor's were saying, and what they were giving him, and how he didn't have pancreatitis [the nurse was wrong] but had something else that just means a lot of water in his belly. He was also being slightly demanding asking mom to get him water from a specific local and getting me to tidy up his little hospital table while telling me exactly where to put everything. He also tried to make a joke, but that didn't work... Well, did it ever? [haha]

It was really funny though because you could tell he was feeling the morphine that he was on. He was kind of whiney and you could see it in his eyes that his head must have been floating. At one point he was telling mom and I that the contents of one of the IV bags was "peachy" but the other time it was "peachier." He also said he's been hallucinating flies over his bed.

The only semi bad news from today is that he's started to lose his hair, which he's not too happy about. [Not like he had much in the first place] Soon enough though, we'll get to call him "Rufus" which is the name him and his brother Dav1d came up with for when he did lose it. [You know, Rufus the naked mole rat from the Disney show Kim Possible?]

Other than that, it seems like the worst of the chemo may have passed [fingers crossed] and it can only get better from here~
Posted by JG at 10:27 PM