Jason and I went down to see dad together. I had to get bloodwork done at Mount Sinai, so I went while Jason went straight to dad. When I got there, dad was yelling at Jason for something... Not sure what. I don't think Jason knows either.

Yeah, dad was being sort of... belligerent. It was actually kind of funny. He was super confused and I think was still living off the idea that he was in a fake hospital room. He yelled at Jason and I to take down the bed railing so he could leave but we told him we weren't allowed. And then he yelled at us like he used to do when we did something bad.

It was refreshing to see he had enough energy to yell and that his mouth wasn't hurting. He also was fidgety, which the nurses didn't like, but it was good to see him moving. He also knew who we were and how he was allowed to talk to us because we're his kids haha.

His liver and kidney's aren't doing well, which is why he's so confused and out of it. He's getting more medication to hopefully fix that. His blood levels are good though. 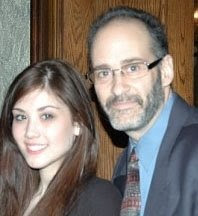